Do you know casing of Sausage contains INTESTINE? 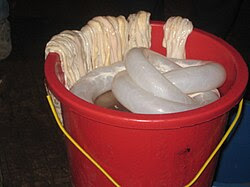 Skin or casing of sausage or "HOTDOG" is made from cellulose, from intestines of animals, goat, horse, cow etc.
http://en.wikipedia.org/wiki/Casing_(sausage)

Casing from beef (in bucket) and sheep (on rear edge of bucket)
Casing, sausage casing, or sausage skin is the material that encloses the filling of a sausage. Casings are divided into two categories, natural and artificial. Artificial casings, such as collagen, cellulose, plastic, and extruded casings, are relatively new to the field, mainly borne of market demand during the technological advances of the early 20th century.[1] 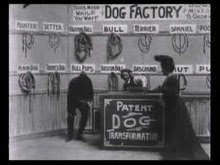 Play media
Dog Factory (1904), a short film that joked with contemporary dual connotations for the word "dog"
The term dog has been used as a synonym for sausage since 1884 and accusations that sausage makers used dog meat date to at least 1845.[19] In the early 20th century, consumption of dog meat in Germany was common.[20][21] The suspicion that sausages contained dog meat was "occasionally justified".[22]
According to a myth, the use of the complete phrase hot dog in reference to sausage was coined by the newspaper cartoonist Thomas Aloysius "TAD" Dorgan around 1900 in a cartoon recording the sale of hot dogs during a New York Giants baseball game at the Polo Grounds.[19] However, TAD's earliest usage of hot dog was not in reference to a baseball game at the Polo Grounds, but to a bicycle race at Madison Square Garden, in The New York Evening Journal December 12, 1906, by which time the term hot dog in reference to sausage was already in use.[19][23] In addition, no copy of the apocryphal cartoon has ever been found.[24]
The earliest known usage of hot dog in clear reference to sausage, found by Fred R. Shapiro, appeared in the December 31, 1892, issue of the Paterson (New Jersey) Daily Press.[25] The story concerned a local traveling vendor, Thomas Francis Xavier Morris, also known as "Hot Dog Morris".[26]


Somehow or other a frankfurter and a roll seem to go right to the spot where the void is felt the most. The small boy has got on such familiar terms with this sort of lunch that he now refers to it as "hot dog." "Hey, Mister, give me a hot dog quick," was the startling order that a rosy-cheeked gamin hurled at the man as a Press reporter stood close by last night. The "hot dog" was quickly inserted in a gash in a roll, a dash of mustard also splashed on to the "dog" with a piece of flat whittled stick, and the order was fulfilled.

Posted by Decoding Hinduism at 2:57 PM