Polysorbate 80 is poison additive in foods

http://flip.it/FdVuWf
Polysorbate 80 is a common food additive that acts as an emulsifier, a solubilizer and a surfactant. It's generally - but not universally - considered to be a safe substance, although it may cause problems in special cases. One of these cases is in people with Crohn's disease. In this disease the lining of the gastrointestinal tract is inflamed. Polysorbate 80 may worsen the inflammation.
Recent research performed at Georgia State University has raised the idea that polysorbate 80 is not as harmless as is generally believed. The research suggests that the chemical changes the composition of the bacterial population in the intestine, promoting the growth of pro-inflammatory bacteria. These bacteria may cause mild gut inflammation even in people who don't have Crohn's disease. The inflammation may then increase the risk of a person developing metabolic syndrome. This syndrome involves a number of unhealthy conditions, which include obesity and insulin resistance. Insulin resistance increases the blood sugar level and is often a precursor to type 2 diabetes.
This group of Escherichia coli bacteria is magnified 10,000 times and colourized. Some strains of E. coli are normal inhabitants of our gut, or intestine. Polysorbate 80 may affect our gut bacteria, leading to inflammation. Polysorbate 80 is a very useful substance in processed
foods. It creates a smooth texture and a great
mouthfeel. It also enables substances to mix when they wouldn't normally do so. Polysorbate 80 is added to health and beauty products, medications and vaccines as well as foods. It's often referred to an excipient in medications and vaccines. Excipients are substances other than the active ingredient that serve a useful function in a product.
IUPAC (International Union for Pure and Applied Chemistry) has established a naming system for chemicals. According to this system, polysorbate 80's real name is polyoxyethylene (20) sorbitan monooleate. It's a synthetic chemical that is sold in the form of a thick yellow liquid. The chemical is soluble in water as well as in several other liquids.

Polysorbate 80 as an Emulsifier

Polysorbate 80 is used as an emulsifier. An emulsifier enables oils to mix with water instead of staying separated. The emulsifier breaks up oil and fat into small droplets. The oil droplets don't dissolve in water, but they do form a fine dispersion which is appealing in food and
cosmetics.
Emulsifiers enable us to enjoy food products such as creamy sauces, mayonnaise, margarine, ice cream and smooth chocolate. Egg yolk is a natural emulsifier, but it has the disadvantage of a short shelf life. Lecithin from soybeans is also an emulsifier. Polysorbate 80 as a Solubilizer and a Surfactant There have been several research projects that suggest a link between polysorbate 80 and Crohn's disease. One project of interest was performed by British researchers and reported in the British Medical Journal.
The researchers explored the effect of polysorbate 80 and soluble plant fibres on the movement of Escherichia coli into isolated human cells and tissue in a laboratory. Some strains of E. coli have been implicated in Crohn's disease. The scientists used M-cells in their experiment. These cells are one of the types present in the intestinal lining and may be the site of bacterial invasion.
The researchers found that polysorbate 80 increased bacterial absorption in both cells from Crohn's disease patients and cells from healthy people. The chemical had a greater effect on the cells from the Crohn's disease patients, however. Electron microscopy confirmed that E.coli had entered the cells. The researchers also discovered that fibre from broccoli and plantain decreased bacterial absorption in the intestinal cells.
The results imply that polysorbate 80 could worsen Crohn's disease by causing more bacteria to enter the intestinal lining. This may in turn increase the abnormal response to the bacteria and the gut inflammation.

Natural green way to get rid of weed 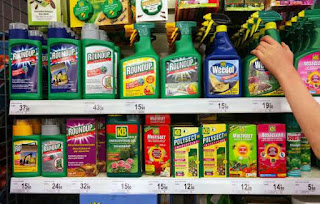 Stop using weed killer like round up unless you are ready for endocrine disruption and liver and kidney damage . Greener way to get rid of weed in your lawn-

Pour the white vinegar into the spray bottle and spray directly onto the weeds, but away from the plants and grass, you intend to keep.
In the case of more aggressive weeds, you can also try the following modified alternative:

1 Gallon of White Vinegar
1/4 Cup of non-toxic dish soap
2 Cups of Epsom Salts
Spray Bottle
You should add all ingredients into the bottle, shake a bit, and spray onto the weeds. After using these natural sprays, you will no longer have weed problems in the yard! Therefore, do not hesitate to try them!
By Decoding Hinduism at October 04, 2016 No comments: